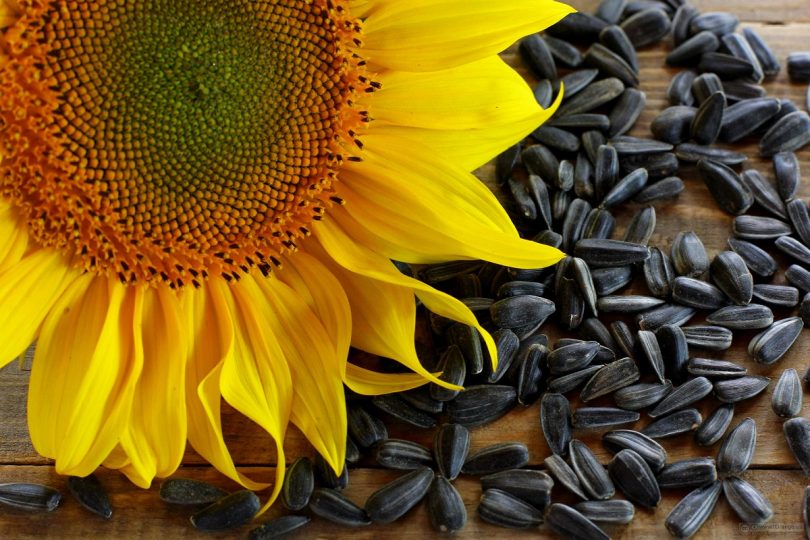 Few seasonal flowers are as spectacular as the sunflower. Its regal stalks and large blooms—in truth a collection of smaller flowers called an inflorescence—are a stunning sight to behold.

Toward the end of the season, sunflowers produce a massive number of seeds from these flowers, a healthy snack for humans and animals alike. Once dried and washed, sunflower seeds can be eaten as is or roasted and incorporated into a variety of dishes.

However, sunflowers aren’t just a tasty snack. Besides being rich in protein, sunflower seeds have an assortment of trace nutrients like potassium, iron, magnesium, and calcium, and are an excellent source of vitamins E and B complex.

How to Dry Sunflower Seeds

How to harvest sunflower seeds

Timing is everything for sunflower seed harvesting. Letting the seeds mature fully is the key to a fruitful harvest.

Most people agree that the best time to harvest sunflower seeds is when the plant itself has started to wilt. The stalks and calyx would turn yellow, the petals have all wilted off, and the seeds are at their plumpest.

At around this time, the plants become very attractive to birds and small mammals, so you might want to harvest sooner rather than later. If the danger of wildlife eating all the seeds is too much, you can dissuade most of them by covering the wilting flowers with bags.

Although sunflower seeds can be allowed to dry off while on the stalk, it is often prudent to harvest the flowers the moment they appear ready.

This will further minimize the losses from animals eating the flower heads while ensuring that the seeds are at their best before storage or consumption.  As a result, sunflower seeds are dried multiple times over the course of the harvest to allow the seeds to mature further.

When drying out the brooms, ensure that there is ample air circulation. Avoid stacking them one over the other; this will interfere with the brooms’ ability to lose moisture and may even invite rot and decay.

Among the best ways to dry sunflower, brooms is to hang them. Tie the brooms together with twine and suspend them securely in a cool, dry, and well-ventilated place such as a garage. In optimal conditions, the brooms will take up to four or five days to fully dry out.

The ease that the seeds fall off of a broom is a good indicator of whether they are ready; if they prove difficult to remove, they are not yet dry enough. Once sufficiently dry, the seeds can be brushed off the brooms by hand and onto a bucket or cheesecloth.

Once the seeds have been removed from the brooms, they should be washed and dried again before storage and consumption.

The number of steps you can take at this points depends largely on how you would use the seeds. Seeds you’re saving for replanting or plan on feeding to animals can simply be washed and dried, while sunflower seeds that you plan to eat are roasted afterward.

Varieties of sunflowers that produce large, striped seeds make the best candidates for snacking and cooking. Although they usually can be eaten once washed, sunflower seeds taste better and are more useful in a broader assortment of dishes when cooked.

The simplest way to prepare sunflower seeds is by toasting them. After a quick rinse, they can be briefly toasted in an oven as a quick and healthy snack.

Add a bit more flavor to the seeds by salting them before roasting. Soak them in a saline bath of about two quarts of water to about 1/4 to 1/2 cup of salt overnight. Drain them in a paper towel and spread them out on a shallow baking sheet.

Roast the sunflower seeds between 30 and 40 minutes in an oven heated to 300 degrees Fahrenheit. Mix the seed occasionally as they cook to ensure that they all roast evenly. Let it completely cool and flavor with olive oil, salt, and spices.

They also make an excellent nutrient-rich ingredient to add to healthy dishes.

When storing sunflower seeds for replanting, don’t forget to properly label them not only with the specific variety of seeds they grew, but also the date they were harvested. This will help you keep track of how long the seeds are viable.