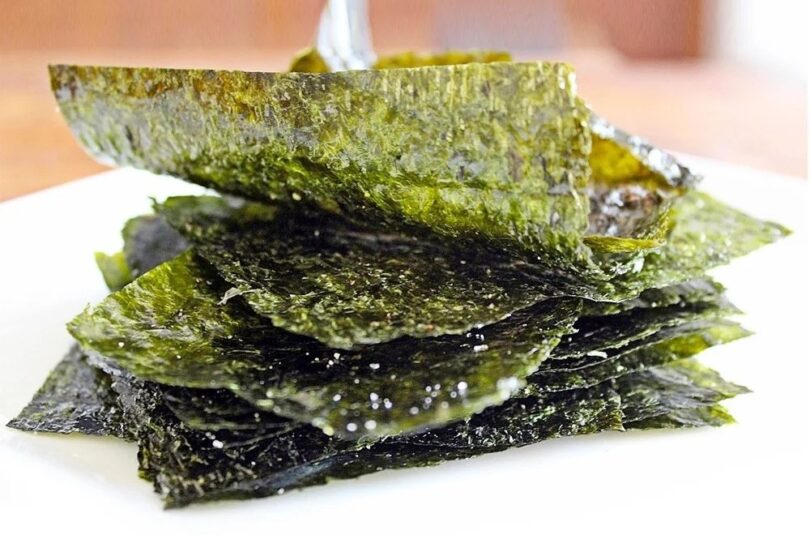 Find out what are the main health benefits of eating dry seaweed.

Seaweed and sea veggies are algae that grow in the water and are commonly known as seaweed or sea vegetables. They are a food source for marine life and may be found in various colors ranging from red, green, brown, and black.

Although seaweed can be found growing on rocky shorelines worldwide, it is most widely consumed in Asian nations such as Japan, Korea, and China. As a result, it is incredibly adaptable and may be used in various cuisines such as sushi rolls, soups and stew, and salads, as well as supplements and smoothies.

NB! Even if the dry seaweed has a lot of health benefits, it is not a substitute for medicine. If you have a medical condition, consult your doctor:)

Furthermore, because seaweed is so nutritious, a small amount goes a long way. Here are some of the dry seaweed health benefits.

To assist and govern the development, energy generation, reproduction, and healing of damaged cells in your body, the thyroid gland sends hormones into the bloodstream. The production of hormones in the thyroid is largely dependent on iodine. Over time, if a person does not consume enough of it, they may begin to develop symptoms such as weight fluctuations, fatigue, and more.

Iodine is a trace element with a recommended dietary intake (RDI) of 150 micrograms per day. Seaweed is special in that it has the potential to absorb large amounts of iodine from the ocean in a concentrated form. Iodine level varies depending on the variety of seaweed, the region where it was cultivated, and the processing method.

The nutrients in each variety of seaweed are different. Dried seaweed not only adds taste, texture, and flavor to your cuisine, but it’s also a simple method to increase your vitamin and mineral consumption. Vitamins A, C, E, and K and folate, zinc, salt, calcium, and magnesium are all found in modest levels in seaweed.

Seaweed also contains high levels of omega-3 fatty acids and vitamin B12. Dried green and purple seaweed appear to contain significant levels of vitamin B12. In one research, merely 4 grams of nori seaweed had 2.4 mcg of vitamin B12 or 100 percent of the RDI. Seaweed also contains the amino acid called tyrosine, which is combined with iodine to form two important hormones that assist the thyroid gland in performing its functions efficiently.

Seaweed has a diverse range of useful plant chemicals, including flavonoids and carotenoids, and the antioxidant vitamins A, C, and E. These have been proven to protect cells in your body from free radical damage.

Fucoxanthin, a type of carotenoid, has been the subject of a lot of studies. It’s the major carotenoid found in brown algae like wakame, and it’s 13.5 times more antioxidants than vitamin E.

It’s thought that you have more bacteria cells than human cells in your body. Sickness and disease can result from an imbalance in these “good” and “bad” gut flora. Seaweed is high in fiber, which has been shown to improve intestinal health. It can account for 25–75 percent of the dry weight of seaweed. This is more fiber than most fruits and vegetables contain.

Instead of being digested, fiber can be utilized by bacteria in your large intestine as a food source. Additionally, sulfated polysaccharides, a kind of sugar present in seaweed, have been demonstrated to promote the growth of “good” gut flora. Short-chain fatty acids (SCFA), which offer support and food to the cells lining your stomach, can also be increased by these polysaccharides.

Even though seaweed includes a lot of fiber, it does not contain many calories. In addition, the fiber in seaweed may help to reduce stomach emptying. This makes you feel satisfied for a longer period and might help you avoid hunger pains.

Seaweed may possibly offer anti-obesity properties, according to some researchers. Several animal studies, in particular, show that a chemical found in seaweed called fucoxanthin may be beneficial in the reduction of body fat.

6. Reduce the Risk of Heart Disease

One of the main causes of death worldwide is heart disease. One of the best dry seaweed health benefits is its ability to lower the risk. High cholesterol, smoking, high blood pressure, and being physically sedentary or overweight are all risk factors. Surprisingly, seaweed may aid in the reduction of blood cholesterol levels.

Excessive blood clotting can potentially cause heart disease. Fucans, a kind of carbohydrate found in seaweed, may aid in blood clotting prevention. Fucans derived from seaweed were proven to inhibit blood clotting as efficiently as an anti-clotting medicine in one animal research.

Scientists are also studying peptides in seaweed. According to preliminary animal research, these protein-like molecules may inhibit part of a route that raises blood pressure in your body.

Diabetes occurs when your body cannot maintain its blood sugar levels. Type 1 and 2 diabetes are predicted to affect around 642 million people globally by 2040. Surprisingly, seaweed has been a focus of study for novel approaches to help those at risk of diabetes.

Fucoxanthin, a chemical found in brown seaweed, was found to assist improve blood sugar management in 60 Japanese participants during eight-week research. Additional improvements were also found among those with a genetic predisposition to insulin resistance, commonly associated with type 2 diabetes.

Furthermore, an alginate component found in seaweed helped mice avoid blood sugar increases after eating a high-sugar meal. Alginate is supposed to slow the absorption of sugar into circulation.

Watch also this interesting video about the benefits of sea kelp.