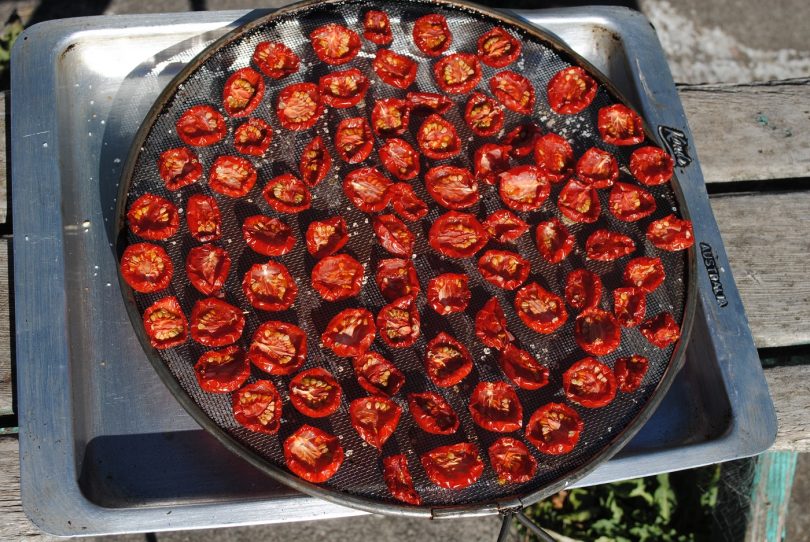 Drying is a process of removing moisture from food, wherein a hard outer layer is produced. It also extends the food’s shelf life by slowing down the action of natural enzymes which make the food soft and mushy. Drying concentrates the flavor adding richness to your dishes.

The different methods of drying tomatoes including:

This article is all about making sun-dried tomatoes.

The Process of Drying Tomatoes in the Sun

Oval or pear-shaped Italian, Roma, or paste tomatoes are ideal for drying. Most people prefer to use Roma tomatoes because these have fewer seeds and have a higher ratio of flesh. But you can also use other varieties that are readily available.

Smaller tomatoes will obviously dry more quickly while large varieties will take longer. Make sure that you use uniformly-sized tomatoes within the same batch so that all the tomatoes will dry more or less at the same rate.

Drying tomatoes don’t actually need any special equipment, however, the process can be done faster with the use of an oven or a dehydrator. Prior to drying, tomatoes should be blanched before removing the skin. Moisture usually resides on the skin and if the skin is not removed, fruits will take longer to dry.

Tomatoes stand to lose about 88% to 93% of their original weight during the process.

Drying Tomatoes in the Sun

Don’t leave the tomatoes outside during the night. You can take them inside at night and put them out in the morning.

If you don’t know how to blanch the tomatoes, here is a quick guide you can follow.

Things to keep in mind when drying tomatoes in the Sun

Sun-drying of tomatoes comes with a few challenges.

First, you’ll have less control over this drying method because Mother Nature is actually in charge. Drying would require dry air and consistently warm temperatures. Too much humidity makes the drying process more difficult if not impossible, take note if you live in an area that is humid.

When drying tomatoes outside you are attracting more than the Sun – you are risking of critter “infestation”. This is where the cheesecloth will come into play.

The bottom line is the use of this drying method is the best option for people living in warmer and dryer areas where the weather is more consistent and predictable. Depending on how hot is the temperature outside, it can also take a while, from a few days to a couple of weeks.

Should you add more flavor to your sun-dried tomatoes?

Aside from sea salt, you may add a few herbs of your choice. But you have to go easy on the salt. Make sure not to overdo it. Keep in mind that tomatoes may lose 90+% of their original weight, meaning the salt to add will be concentrated in what’s left of the tomato upon drying.

How to know if the tomatoes are done

The tomatoes are ready when they have really dried out yet still pliable. Squeeze the tomatoes between your fingers, they should be bendable, but not too brittle that they snap. If there is still moisture and the tomatoes are squishy when you squeeze them, they are not yet done.

It is important to check the tomatoes regularly during the drying period, particularly towards the end. If they are dried too long the tomatoes will come out tough and leathery. On the other hand, if they are not dried long enough, mold will grow quickly.

After the drying process, you should get perfectly dry tomatoes but not too crispy. The sun-dried tomatoes don’t have inner moisture, thus preventing bacterial growth.

You have to use bags or containers that seal completely to serve as storage. An opaque or coated container is your best choice, as this type prevents light from entering the tomatoes which can strip sun-dried tomatoes of flavor and color.

Be wary of some signs of rot or mold on sun-dried tomatoes. Avoid using them when you notice the growth of molds. Discard moldy tomatoes immediately.

Packing sun-dried tomatoes in olive oil will plump them up. They will be perfect for salad dressing or pasta salads.

You can use the dried tomatoes after a few days. You can either keep them in the refrigerator (to extend shelf life) or at room temperature in your pantry. You know they are bad if the tomatoes taste rancid.